AS THE BRUSH ARC BASEBALL TEAM, guided by Manager Brett Munn and Assistant Coach Mike Medve, dove headlong into WRC Conference play, it quickly became obvious that the competitive level had risen several notches from non-conference play, and the team had their hands full. After starting off 4-0, Brush dropped a heartbreaker to Hawken in extra innings to ruin the perfect start. Waiting in the wings were contests against WRC formidable foes Painesville Riverside, Eastlake North, and Willoughby South, intertwined with battles vs. Garfield Hts. and Euclid – the latter game a thing of beauty as starting pitcher Khalil Littlejohn struck out 12 Panthers, retiring the final 14 in a row in a 2-0 no-hitter that evened the Arc Nine at 6-6 on the season.

Next up for Brush is a road game at Willoughby South today, followed by a 2-game set vs. Madison. On Sunday, the Arcs travel to Classic Park in Eastlake, home of the Single A Lake County Captains, for a non-conference tilt against the Lake Catholic Cougars at 11:00am. Tickets to the Sunday ballgame ARE available at the Brush High School Athletic Office, located in Welser Gym. For information, please call 216 – 691 – 2644.  For recaps and linescores of the last 8 ballgames – keep reading !

In Walk-Off Fashion, The Arcs Lose To Hawken

….. It came down to the last play, but the Arcs were on the wrong end of a 5-4 defeat to Hawken on April 5. The game was tied at four with Hawken batting in the bottom of the eighth when Dominic Brancel singled on a 0-2 count, scoring one run. The Arcs got things started in the first inning. Khalil Littlejohn doubled on a 1-1 count, scoring one run. In the bottom of the seventh inning, Hawken tied things up at four. Hawken scored one run when Tommy Clark singled. Brush scored three times in the fifth inning, scored its runs on an RBI double by Littlejohn. Devin Anthony was the winning pitcher for Hawken. The ace allowed three hits and four runs over five innings, striking out 12. Brancel threw three innings in relief out of the bullpen. He recorded the last nine outs to earn the save for Hawken. Dimario Ballom took the loss for the Arcs. Ballom went two-thirds of an inning, allowing one run on two hits and walking one. Littlejohn went 2-for-3 at the plate to lead Brush in hits. Hawken scattered six hits in the game. Brancel and Clark each had multiple hits for the Hawks.

The Arcs struggled to get their offense going on April 6th, getting easily dispatched by Riverside, 14-1. In the first inning, Brush got their offense started. Dimario Ballom‘s sac fly scored one run for the Arcs. Riverside pulled away for good with seven tallies in the second inning. In the second, Sanchez doubled on a 1-2 count, scoring one run, Knight drew a walk, scoring another run. Brennan then singled on a 0-2 count, scoring one, Brown singled on the first pitch of his at bat, scoring two more and Reutter‘s sac fly scored another run for the Beavers. Sanchez followed with a walk, scoring yet another run. Knight earned the win for Riverside. He allowed zero hits and one run over four innings, striking out six. Jones threw one inning in relief out of the bullpen. Khalil Littlejohn took the loss for Arcs. The pitcher surrendered seven runs on five hits over one inning. Andrew Jones started the game for Arcs. The righty surrendered zero runs on zero hits over two-thirds of an inning, striking out one and walking zero. Cameron Stovall led the Arcs with one hit. Riverside racked up 11 knocks on the day. Brennan and Reutter both managed multiple hits for Riverside. Brennan went 3-for-4 at the plate to lead Riverside. 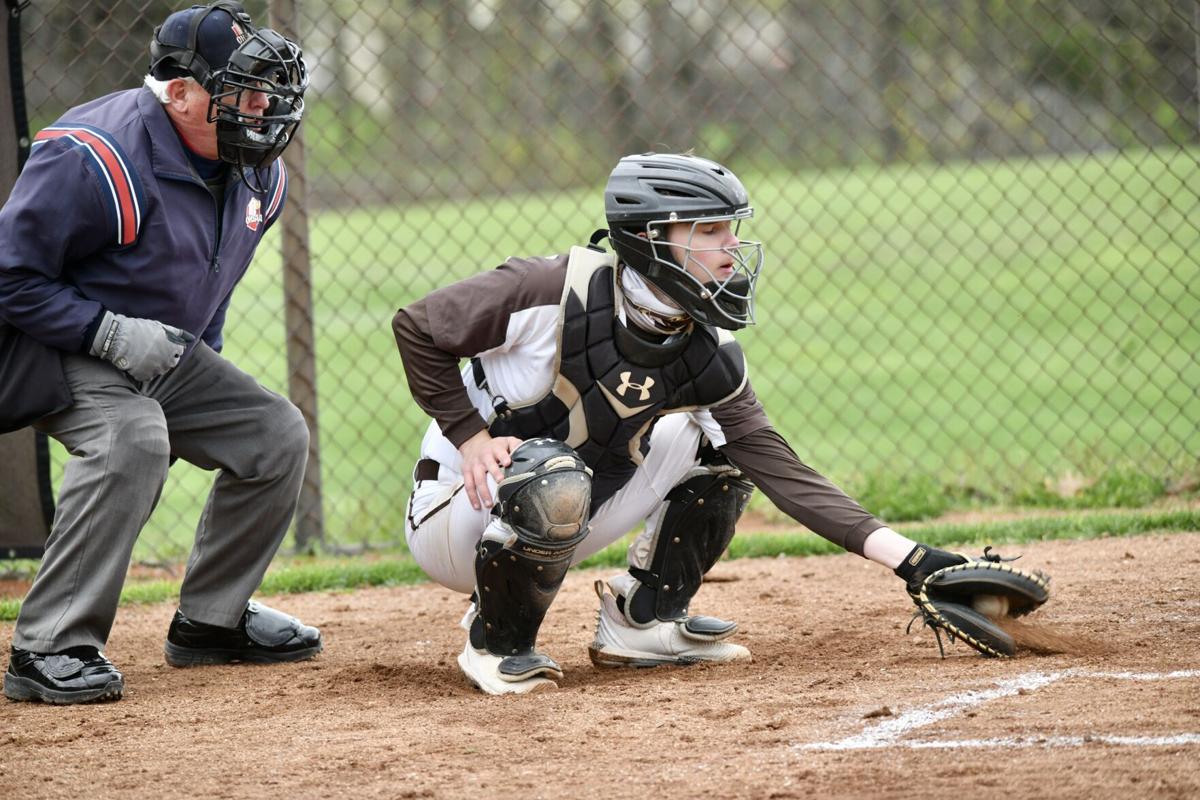 The Arcs watched this game slip away early and couldn’t recover in a 13-3 loss to Riverside on Friday, the second of 2 match-ups with the Beavers. Riverside scored on a double by Lastoria, a double by Brown, an error, and a walk by Abel in the first inning. The Arcs struggled to put runs on the board and had a tough time defensively containing Riverside, giving up 13 runs. Riverside got things moving in the first inning, when Lastoria doubled on a 0-1 count, scoring two runs. The Arcs scored three runs in the fifth inning. Brush’s offense in the inning came from a single by PJ Tripi, a sac fly by Sean Miller, and a double by Jared Wittels. Reutter was credited with the victory for Riverside. The bulldog allowed five hits and three runs over six innings, striking out ten. Wittels took the loss for Arcs. The pitcher allowed ten hits and 13 runs over five and two-thirds innings, striking out five. The Arcs tallied five hits. Manny Auzenne and Tripi each racked up multiple hits for the Brush Nine. Riverside stroked 11 hits in the game. Brown, Reutter, and Lastoria each had multiple hits for Riverside. Riverside didn’t commit a single error in the field. Knight had the most chances in the field with ten.

4-Hit Day For Littlejohn As Arcs Skirts Past Garfield Heights

Khalil Littlejohn got busy on the basepaths on Saturday, knocking out four hits in Brush’s 17-7 victory over Garfield Heights. Littlejohn singled in the first, doubled in the second, tripled in the third, and singled in the fourth. Brush grabbed an early lead, the Arcs scoring on a single by Littlejohn, a double by Sean Miller, and a sacrifice fly by Luke Young in the first inning. Dimario Ballom was the winning pitcher for Arcs. The pitcher went three and a third innings, allowing six runs on four hits and striking out eight. Dylan Taylor tossed one and two-thirds innings in relief out of the bullpen. D Vangant took the loss for Garfield Heights. The righty lasted four innings, allowing ten hits and 17 runs while striking out four. The Arcs launched one home run on the day. Miller had the long ball, which sailed over the 325 foot marker in left. In the second inning alone, Brush tallied ten hits. Littlejohn and Miller each collected multiple hits for the Arcs. Littlejohn led Brush with four hits in four at bats. The Arcs pilfered 14 bases during the game as four players stole more than one. Andrew Jones led the way with four. Garfield Heights did register six hits in the game. Lenart and Robinson each accounted for multiple Bulldog hits. Lenart went 3-for-3 at the plate to lead Garfield Heights offensively. 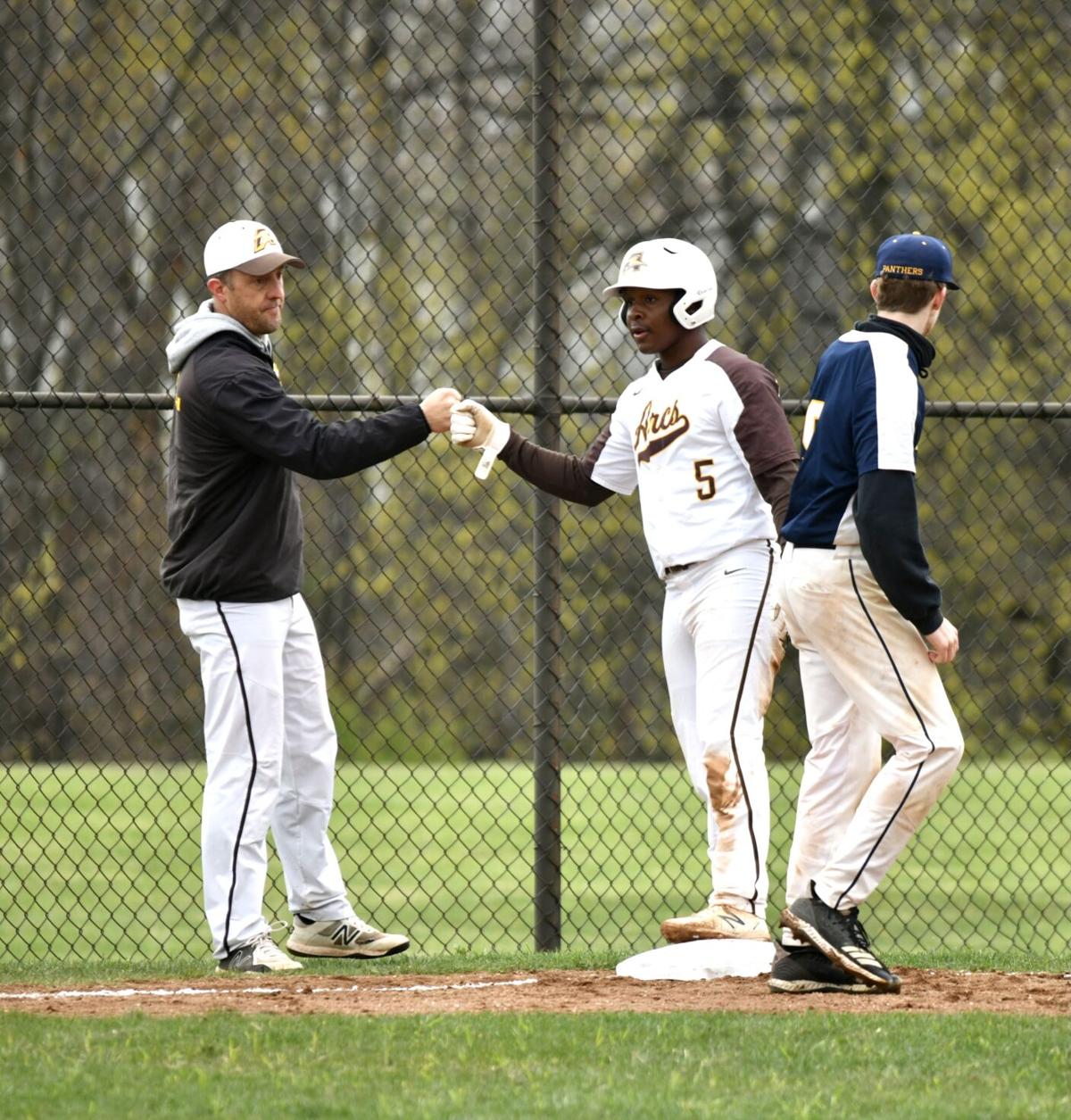 North Runs Away With Early Lead in Victory

The Arcs watched the game slip away early and couldn’t rebound in a 7-0 loss to North on April 13. North scored on a double by Britsky and a double by Barner in the first inning. The Arcs struggled to put runs on the board and had a tough time defensively containing North, giving up seven runs. North got things moving in the first inning, when Britsky doubled on a 1-0 count, scoring two runs One bright spot for the Arcs was a double by Andrew Jones in the first inning. Metz was credited with the victory for North. The fireballer lasted five innings, allowing two hits and zero runs while striking out seven and walking one. Zele threw two innings in relief out of the bullpen. Khalil Littlejohn took the loss for the Arcs. Littlejohn went five innings, allowing five runs on six hits and striking out two. Jones and Manny Auzenne each collected one hit to lead the Arcs. Barner led the Rangers with two hits in two at bats. North tore up the base paths, as three players stole two bases. Lanning led the way with a pair.

Brush again struggled to get their offense going on April 14, getting easily dispatched by North, 12-2 to drop another 2-game series to the visiting Rangers. The Arcs took a brief lead in the first inning, when Sean Miller grounded out, scoring one run. North pulled away for good with three runs in the fourth inning. In the fourth Keough doubled on a 2-1 count, scoring one run, Lanning singled on a 1-0 count, scoring one run, and an error scored one run for North. North scored four runs in the seventh inning. North’s big bats were led by Zele, Britsky, and Barner, all knocking in runs in the inning. Pecsi led the Rangers to victory on the hill. The senior surrendered one run on two hits over five and a third innings, striking out four. Zele threw one and two-thirds innings in relief out of the bullpen. He recorded the last five outs to earn the save for North. Jared Wittels took the loss for Arcs. The lanky lefthander went four and a third innings, allowing seven runs on five hits and striking out seven. Khalil Littlejohn, Ababacar Seck, and Andrew Jones each managed one hit to lead the Arcs. Barner went 3-for-4 at the plate to pave the way for North in hits. North was errorless in the field. Stuck had six chances in the field, the most on the team.

South Runs Away With Early Lead in Victory

“The Men of Munn” (Manager Brett, that is) watched this ballgame fade away early and the result was a 10-0 white-washing to Willoughby South on Friday. The Rebels revved it up in the top half of the 1st as they scored on an error, a double by Costello, and a sacrifice fly by Gural in the first inning. The Arcs struggled to put runs on the board and had a tough time defensively containing South, giving up ten markers in just 5 frames. Humphrey earned the victory on the mound for South. The junior lasted five innings, allowing three hits and zero runs while striking out eight and walking zero. Dimario Ballom took the loss for the Arcs. Ballom surrendered seven runs on four hits over four innings, striking out three. Jones led the Arcs with two hits in two at bats. Costello went 3-for-3 at the plate to lead South in hits. South didn’t commit a single error in the field. Atwell had the most chances in the field with eight. 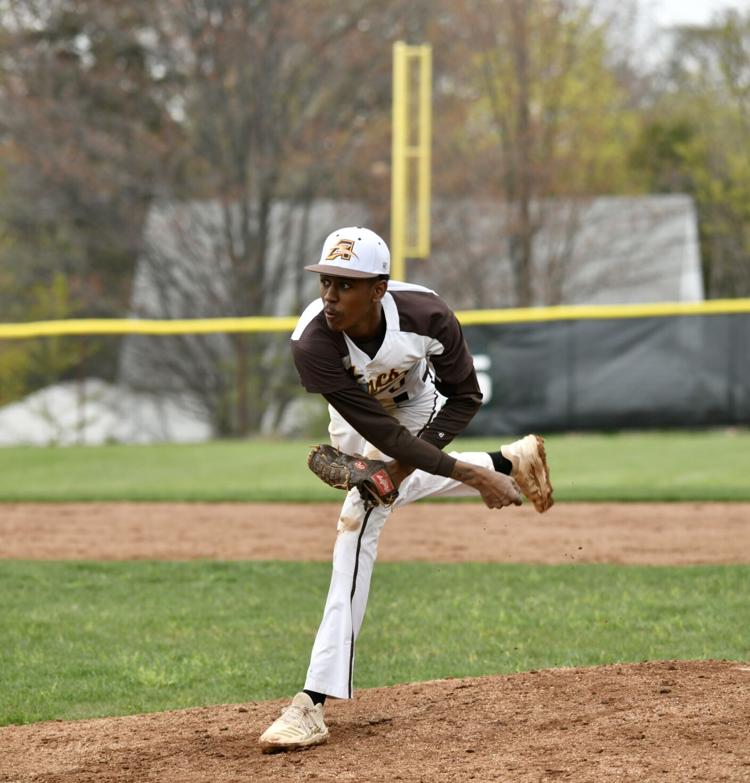