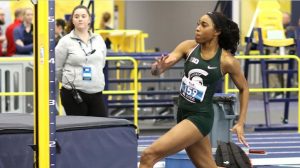 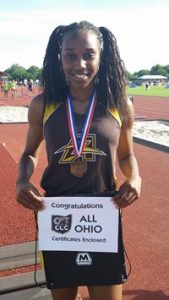 One of the greatest track and field athletes to come out of Brush is Asya Reynolds. Asya is a 2015 Brush Graduate who currently attends Michigan State University. She is an amazing student-athlete  … was a Four-year letterwinner in track and field and three-year letterwinner in volleyball at Brush High School … Was All-Conference, All-District, and All-State in track and field for all four years … Was All-American in track and field for three years … All-Conference in volleyball for three years … Was the indoor 4 x400m state champion and placed fourth in the outdoor 4x00m at state meet as a freshman … Placed 7th at the Outdoor All-American Heptathlon and was the indoor long jump runner-up at state meet as a sophomore … Placed 7th in the outdoor 300m hurdles and 9th in the long jump at state meet, placed fourth in the outdoor All-American Heptathlon and seventh in the 400m hurdles during her junior year … Was the indoor long jump state champion, outdoor All-American Heptathlon runner-up and placed 5th in the 400m hurdles as a senior … Ran track for Cleveland Express Track Club ad was a seven time All-American AAU and USATF … Named captain of track and field and volleyball during her senior year. See below for her acco 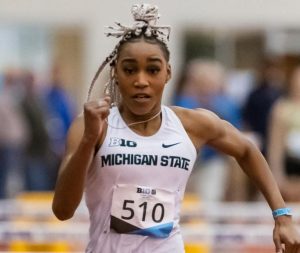 mplishments at Michigan State as well as some links to other stories on Asya.

Links to articles about Asya….

Today me and about 70,000 other people learned that I am the first women in Michigan State history to earn All-American accolades in the Heptathlon. God is so good. I’m so blessed to receive the Co-Athlete of the year award and congrats to Ally!Victory Lap up next. #blackgirlMSU pic.twitter.com/JDBlysMfIM